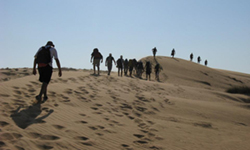 18-year-old Israelis serve their countries for two or three years, most in the army, air force or navy. High school students from the lower strata of society need extra help to achieve a useful and meaningful army service. They have a harder time qualifying for popular elite army units which require advance preparation. They also have less awareness of their options such as training and career opportunities and special types of service.

Graduates of the program are motivated and well equipped with skills and experiences that will allow them to excel in the military. By facilitating a more meaningful military service for a population which has not generally excelled in this area, Derech Eretz completely changes the life trajectory of the student due to the fact that in Israeli society, quality military service is a central factor in enabling social mobility.

In 2011 Derech Eretz was one of the first Israeli nonprofit organizations to introduce the 7-month mechina (August to March). By allowing students to start their military service in March of their draft year, unlike other mechina programs which require a delayed start and thus a delayed finish of their military service, Derech Eretz is able to provide the advantage of a mechina program to students who would otherwise have to forego the opportunity.

Derech Eretz has 3 mechina campuses in the Negev.

Nine years ago, we began with 23 students. Today, we have 750 program graduates and an additional 170 Israeli youth will be joining us in September 2019.